On noon, April 26th, 2001, a coelacanth was hauled aboard the trawler MV Venture II, reportedly operating off the Kenyan resort town of Malindi. Dinofish.com received an unconfirmed report of this catch on May 4th, 2001, then advised the correspondant on correct preservation and reporting proceedures. The trawler is owned by Basta Allessandro and captained by Suleiman Fali with a 23 man crew. The fish, a female, was 1.7 metres long and weighed 77 kilogrammes. In September, 2001, after residing frozen in the freezers of Wananchi Marine products, the fish came to the attention of Kenyan President Daniel Moi at a commercial exhibit, and was handed over to the Department of Ichthyology at the National Museums of Kenya. The fish has since been dissected by a team led by Dr. Luc De Vos. Tissues have been sent to Max Planke Institute in Germany for DNA analysis to see if this fish represents a separate population from the Comoros. This is the northernmost reported catch of a coelacanth thus far. 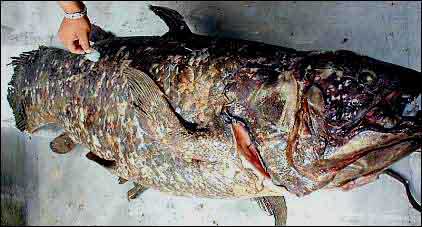